The world is over-correcting

Ruxy Poo said:
I appreciate your discussion. My example was ridiculous bc it is ridiculous out there 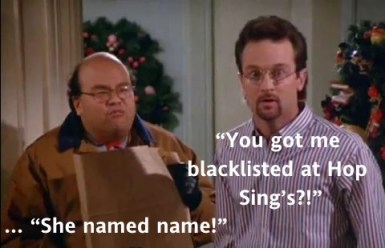 au4life_rz said:
Ruxy, did you notice in my response, that I AGREED that we are over-correcting??? I HATE this social media/mob justice system where if you don't agree with group-think, they spring into over-action, and try to get you fired. 1st amendment rights are good in general, (abused many times, but overall good), and there are other ways to deal with ignorance and harmful ideology IMHO. Don't deflect from the point I'm making about the silly example, by focusing only on the fact that we do over-correct.

However, my disagreement with your OP had nothing to do with the over-correction, but was due to the fact that you used such a ridiculous example to highlight your point. As I said initially, there are plenty of valid examples, but when you use something that silly, it causes people to look, roll their eyes, and wave their hand with a "Get the F outta here with that ish, these people have lost their minds" attitude. Then, when they come across other complaints that are actually valid, they take the same approach and just wave them off, because they've unconsciously/consciously lumped the valid issues in with the silly, contrived examples similar to complaining about a crayon, and by doing so they end up dismissing valid complaints and doing harm to society. Just look at how many "likes" you got for your OP.
Click to expand...

Detective rux checking back in. This happened in 2013 as well
Reactions: audeuce02

Detective rux checking back in. This happened in 2013 as well
Click to expand...

I humbly believe you are doing harm, (not good), highlighting and further creating and entrenching the divide, but Kerry-on if you must. I agreed with you, and shot my best shot to show you the BIGGER PICTURE concern. I truly hope that it is not indeed a one step forward, and two steps backwards situation, (in the bigger picture), but in all likelihood, that is the case.

Your message is loud and clear. Nothing to see here. "We don't have any real problems out there. Just folks blowing stuff out of proportion and over-correcting".
Last edited: Jun 11, 2020

jdAU08 said:
Have you seen his show? It's extremely racist. But not surprising as racism is only one-sided in 2020
Click to expand...

I've watched his show and didn't get that at all.

au4life_rz said:
And you are part of the problem for sharing/propagating such a ridiculous, likely tampered meme. Have you seen anyone of substance expending resources on righting this "wrong"??? Folks have been duped for sure if they'd give a flip about something so insignificant, when real, life-impacting things need to be changed.

All that said, we DO over-correct, but again, I don't believe this to be a good example of it. There are enough real examples that you could have used rather than propagating some crap that will only inflame folks and route some off from true issues, (as they'll start lumping in really importing things, and writing them off as just another ridiculous over-reaction similar to the crayons).
Click to expand...